The up in a basket part of my aviation quotes collection:

How posterity will laugh at us, one way or other! If half a dozen break their necks, and balloonism is exploded, we shall be called fools for having imagined it could be brought to use: if it should be turned to account, we shall be ridiculed for having doubted.

On this subject of the hygienic effects of ballooning, Mr. Wise is enthusiastic. The blood we are told, begins to course more freely when up a mile or two with a balloon—the exretory vessels are more freely opened—the gastric juice pours into the stomach more rapidly—the liver, kidneys, and heart work under expanded action in a highly calorified atmosphere—the brain receives and gives more exalted inspirations—the whole animal and mental system become intensely quickened and more of the chronic morbid matter is exhaled and thrown off in an hour or two while two miles up of a fine summer's day, than the invalid can get rid of in a voyage from New York to Madeira. The appetite is immensely increased, and the spirits elevated.

In reading Mr. Wise, one feels aerial inclined, and predisposed to believe with him that great problems, commercial, international, and social, are yet to come of navigating the air; and that the art will be redeemed from its present very magnificent and sublime but unproductive state.

The best way of travel, however, if you aren't in any hurry at all, if you don’t care where you are going, if you don’t like to use your legs, if you don’t want to be annoyed at all by any choice of directions, is in a balloon. In a balloon, you can decide only when to start, and usually when to stop. The rest is left entirely to nature.

We now know a method of mounting into the air, and I think we are not likely to know more. The vehicles can serve no use till we can guide them; and they can gratify no curiosity till we mount with them to greater heights than we can reach without; till we rise above the tops of the highest mountains, which we have yet not done. We know the state of the air in all its regions, to the top of Teneriffe, and, therefore, learn nothing from those who navigate a balloon below the clouds. The first experiment, however, was bold, and deserves applause and reward. But since it has been performed, and its event is known, I had rather now find a medicine that can ease an asthma.

We have had bird’s-eye views seen by mind’s eye imperfectly. Now we will have nothing less than the tracings of nature itself, reflected on the plate.

Gaspard Felix Tounachon (known as 'Nadar'), regards capturing a daguerreotype (an early form of phtography) of the valley of Bièvre, France, from a balloon. 1858.

The very latest thing to do, if one really wants to be up-to-date, is to join the Aero Club of Great Britain, and go in for the sport of ballooning …

One returns to earth with a splendid appetite, completely invigorated in mind and body, and with lungs and blood thoroughly scavenged by the inhalation of the pure air in the high altitudes.

Harry Harper, on the popular week-end ballooning parties, first aviation special article for the Daily Mail newspaper, 1906. Quoted in 1958 book Flying Witness: Harry Harper and the Golden Age of Aviation. Not everybody was so impressed. The same book has the 1906 blasé reaction of a ‘neighbouring squire’s daughter going up with Rolls [of Rolls-Royce] for the first time’:

“It’s a bit disappointing, after all. The peculiar sensation of ballooning is that there is no sensation at all!” 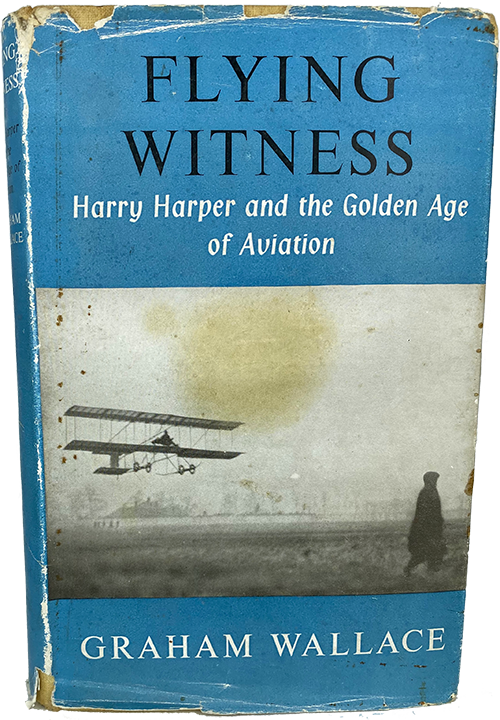 Suddenly the wind ceased. The air seemed motionless around us. We were off, going at the speed of the air-current in which we now lived and moved. Indeed, for us there was no more wind; and this is the first great fact of spherical ballooning. Infinitely gentle is this unfelt motion forward and upward. The illusion is complete: it seems not to be the balloon that moves, but the earth that sinks down and away…

Villages and woods, meadows and chateaux, pass across the moving scene, out of which the whistling of locomotives throws sharp notes. These faint, piercing sounds, together with the yelping and barking of dogs, are the only noises that reach one through the depths of the upper air. The human voice cannot mount up into these boundless solitudes. Human beings look like ants along the white lines that are highways; and the rows of houses look like children's playthings.

The balloon seems to stand still in the air while the earth flies past underneath.

And now I have a little boat
In shape just like the crescent moon.
Fast through the clouds my boat can sail,
But if perchance your faith should fail,
Look up and you shall see me soon.

William Wordsworth, Peter Bell: A Tale in Verse, Prologue. Written in 1798, but not published until 1819.

Previous to this time I had never even a balloon except from a distance. Being interested in their construction, I was about to institute a thorough examination of all its parts, when the aeronaut announced that all was ready. He inquired whether I desired to go up alone, or he should accompany me. My desire, if frankly expressed, would have been not to go up at all; but if I was to go, company was certainly desirable. With an attempt at indifference, I intimated that he might go along.

George Armstrong Custer, while a Captain in the cavalry. Regards order to go aloft in one of Thaddeus Lowe’s balloons to observe the movements of the Confederate forces. Quoted in Son of the Morning Star, 1862.

As we were returning to the inn we beheld something floating in the ample field of golden evening sky, above the chalk cliffs and the trees that grow along their summit. It was too high up, too large, and too steady for a kite; and, as it was dark, it could not be a star… The village was dotted with people with their heads in air; and the children were in a bustle all along the street and far up the straight road that climbs the hill, where we could still see them running in loose knots. It was a balloon, we learned, which had left St. Quentin at half past five that evening. Mighty composedly the majority of the grown people took it. But we were English, and were soon running up the hill with the best. Being travelers ourselves in a small way, we would fain have seen these other travelers alight.

The spectacle was over by the time we gained the top of the hill. All the gold had withered out of the sky, and the balloon had disappeared. Whither? I ask myself; caught up into the seventh heaven? or come safely to land somewhere in that blue uneven distance, into which the roadway dipped and melted before our eyes? Probably the aeronauts were already warming themselves at a farm chimney, for they say it is cold in these unhomely regions of the air. The night fell swiftly. Roadside trees and disappointed sight-seers, returning through the meadows, stood out in black against a margin of low, red sunset. It was cheerfully to face the other way, and so down the hill we went, with a full Moon, the color of a melon, swinging high above the wooded valley, and the white cliffs behind us faintly reddened by the fire of the chalk kilns.

Robert Louis Stevenson, from his travelogue of a canoe trip from Antwerp to Paris, written when he was 25, An Inland Voyage, 1878.

I have known today a magnificent intoxication. I have learnt how it feels to be a bird. I have flown. Yes I have flown. I am still astonished at it, still deeply moved.

Le Figaro, 1908. Quoted in several places, including the 1912 book The Romance of Aeronautics: An Interesting Account of the Growth & Achievements of all Kinds of Aerial Craft.

Fear is wholly excluded. There can be noting but pleasure connected with it … I enjoyed every moment of the trip and when the time finally came for us to land I felt greatly disappinted — the two hours spent in the balloon had sped like minutes and I am anxiously awaiting another opportunity when I can ascend in a larger balloon and with a brisker wind. 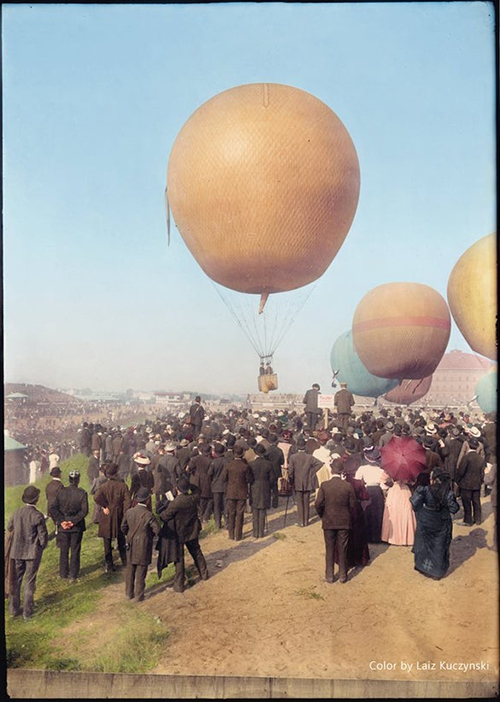 Like a shamanistic language, flight speaks in different idioms. We can blast rockets to the stars. We can race across the sky on fixed wings. Ballooning appeals because it is more languorous and low-tech; it’s adventure in an antique mood.

What a treat to stroll through the veils of twilight, to float across the sky like a slowly forming thought. Flying an airplane, one usually travels the shortest distance between two points. Balloonists can dawdle, lollygag, cast their fate to the wind and become part of the ebb and flow of nature, part of the sky itself, held aloft like any bird, leaf or spore. In that silent realm, far from the mischief and toil of society, all one hears is the urgent breathing of the wind and, now and then, an inspiring gasp of hot air.

Above me I saw something I did not believe at first. Well above the haze layer of the earth's atmosphere were additonal faint thin bands of blue, sharply etched against the dark sky. They hovered over the earth like a succession of halos.

We’re at 103,000 feet. Looking out over a very beautiful, beautiful world … a hostile sky. As you look up the sky looks beautiful but hostile. As you sit here you realize that Man will never conquer space. He will learn to live with it, but he will never conquer it. Can see for over 400 miles. Beneath me I can see the clouds… . They are beautiful … looking through my mirror the sky is absolutely black. Void of anything… . I can see the beautiful blue of the sky and above that it goes into a deep, deep, dark, indescribable blue which no artist can ever duplicate. It's fantastic.

Joe Kittinger, in the Excelsior III balloon over the western edge of the Tularose Basin, 16 August 1960.

Half the art of ballooning is to make your crashes so gentle that you can fool yourself into calling them landings.

Richard Branson, pilot and founder of Virgin Atlantic and Virgin Galactic. In his book Reach For The Skies, 2011.

Troy Bradley, first words upon landing in the sea just off Mexico after crossing the Pacific from Japan in a balloon, smashing the all-time balloon distance and endurance records. Reported by The Guardian newspaper, 31 January 2015.

The winds have welcomed you with softness,
The sun has greeted you with it’s warm hands,
You have flown so high and so well,
That God has joined you in laughter,
And set you back gently into
The loving arms of Mother Earth.

Anon, known as The Baloonists Prayer, believed to have been adapted from an old Irish sailors’ prayer.

Didn’t find what you were looking for? There are many more quotes on my Magic and Wonder of Flight page and the Historical Predictions page. Or try a seach of the entire database: