Sometimes eddifying, sometimes sad, these are the last recorded words of aviators and accidents. A small part of my aviation quotation collection, which also has an Aviation Safety section and a 9/11 Quotes page.

… If I take the wings of the morning,
and dwell in the innermost parts of the sea.

The unadorned, flat-to-the-ground gravestone of Charles A. Lindbergh. He died of cancer on the island of Maui, Hawaii, on 26 August 1974. He was buried three hours later in simple work clothes. 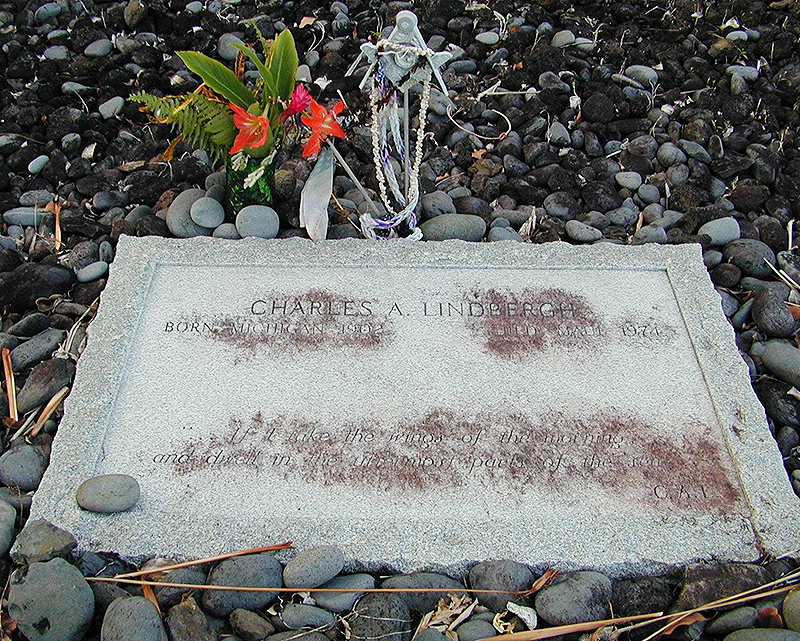 Sacrifices must be made.

Otto Lilienthal, one of the main sources of inspiration for the Wright brothers. Widely cited in books and elsewhere as being said after a glider crash that took his life the next day, 10 August 1896. The original German is, “Opfer mussen gebracht werden”, and that is certainly what’s on his gravestone: 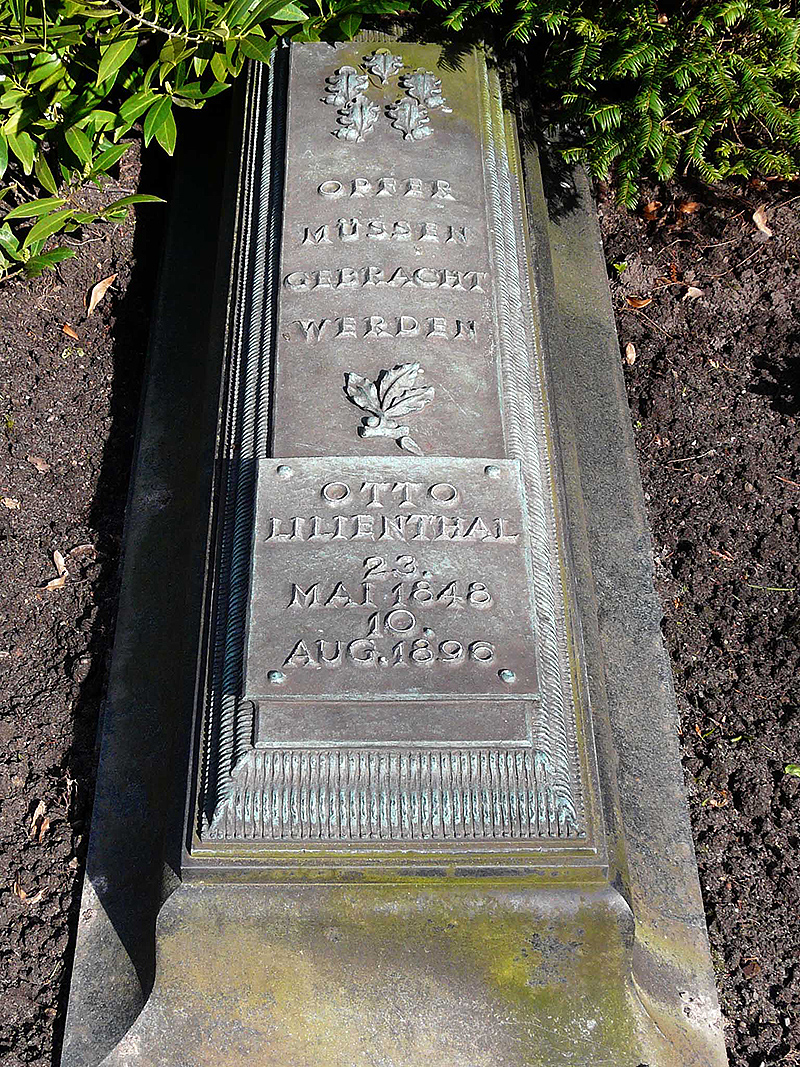 But the full history is more complex. He did suffer a glider crash on Sunday 9 August 1896. His mechanic and assistant Paul Beylich ran to him in the wreckage, where Otto reportedly said, “What happened? … I’ll relax a bit, and we’ll continue.” But he was paralyzed from the waist down, and soon transported to a clinic in Berlin, where he died the next day. An 11 August 1896 story in the New York Journal newspaper quotes his last words as:

“Mine is the true inventor’s death. I am satisfied to die in the interest of science.”

But that account appears nowhere else and has no attribution. A letter to the journal Nature a few weeks later, describing Otto’s death by his friends Alard du Bois-Reymond and Carl Runge makes no mention of any last words.

Lilienthal did say the sacrifices phrase several times during his life. So how did it get attributed to the day before he died? It was much later, in a 1930 book The Lilienthals by his daughter Anna and brother Gustav, that the now famous words are first cited in this context. And the phrase wasn’t placed over his grave until 1940.

Georges Chavez, last words after crashing his Bleriot airplane on a trailblazing flight over the Alps, September 1910. In orignal Spanish: “Arriba, siempre arriba." His words became the motto of the Peruvian Air Force.

What’s the hurry? Are you afraid I won’t come back?

Manfred von Richthofen, 'The Red Baron', reportedly last recorded words, laughing in reply to a request for an autograph as he was climbing into the cockpit of his plane. He was shot down and died on that mission, morning of 21 April 1918.

When I go, I’d like best to go in my plane, quickly.

I have a feeling that there is just about one more good flight left in my system and I hope this trip is it. Anyway when I have finished this job, I mean to give up long-distance stunt flying.

Amelia Earhart, departing from Los Angeles, California, for Florida on 21 May 1937. Start of her last flight.

Jessica Dubroff, seven-year-old pilot speaking to her mother by telephone as the engines revved for takeoff, she (and her flight instructor) crashed minutes later in rough weather, 1996. The Federal Aviation Regulations were later changed to stop such dubious record flights by small children.

Did he not clear the runway … that Pan American?

Flight Engineer William Schreuder, KLM, 27 March 1977, just prior to the worst aviation crash ever, the collision of two B-747’s on the ground in the Canary Islands.

God, look at that thing!
That don’t seem right, does it?
That's not right.

How do you expect to get us to the Moon if you people can’t even hook us up with a ground station?

Gus Grissom, radio transmission expressing frustration with NASA commuication equipment during the plugs out test of the Apollo 1 spacecraft, 27 January 1967.

CAPCOM Richard Covey: Challenger Houston, you are go at Throttle Up.

CAPCOM Charlie Hobaugh: Columbia, Houston. We see your tire pressure message and we did not copy your last.

The cause in which they died will continue. Mankind is led into the darkness beyond our world by the inspiration of discovery and the longing to understand. Our journey into space will go on.

In the skies today we saw destruction and tragedy. Yet farther than we can see there is comfort and hope. In the words of the prophet Isaiah, “Lift your eyes and look to the heavens. Who created all these? He who brings out the starry hosts one by one and calls them each by name. Because of His great power and mighty strength, not one of them is missing.”

The same Creator who names the stars also knows the names of the seven souls we mourn today. The crew of the shuttle Columbia did not return safely to Earth; yet we can pray that all are safely home.

President George W. Bush, address to the nation from the Cabinet Room, following the destruction on re-entry of the Space Shuttle Colombia, 14:04 EST 1 February 2003.

Portland Tower, United 173, Mayday! we’re … the engines are flaming out — we’re going down. we’re not going to be able to make the airport.

First Officer Rodrick Beebe. The DC-8 was ran out of fuel in an accident that started the assertiveness training that is now part of Crew Resource Management (CRM). 28 December 1978.

American 191, do you want to come back? If so, what runway do you want?

ORD tower controller after seeing the the entire left engine and pylon of the DC-10 came off at rotation. The crippled plane crashed 30 seconds later. 25 May 1979.

Captain Michel Asseline, Air France, last recorded words, in reply to copilot Captain Pierre Mazieres alerting him to watch out for the pylons ahead. Ten seconds later the A-320 crashed into trees during an airshow. 26 June 1988.

Why is it turning … Yes it is.

El'dar Kudrinsky, the 15 year old son of the captain of Aeroflot 593. he had earlier asked, “May I turn this — the control wheel — a bit,” and had disconnected part of the autopilot. An action unnoticed by the adult flight crew. Last recorded words, 22 march 1994

First Officer Richard Hazen, ValuJet 592, last recorded words before crashing into the Everglades due to massive in-flight fire. 11 May 1996.

Halifax Terminal ATC: Swissair one eleven just a couple of miles I’ll be right with you.

Swissair 111: Roger. [sound of autopilot being disconnected] And we are declaring emergency now, Swissair one eleven.

Halifax Terminal ATC: Copy that. Swissair one eleven you are cleared to, ah, commence your fuel dump on that track and advise me, ah, when the dump is complete.

I’ve never seen icing conditions. I’ve never deiced. I’ve never seen any — I’ve never experienced any of that. I don’t want to have to experience that and make those kinds of calls. you know I’d've freaked out. I’d've have like seen this much ice and thought oh my gosh we were going to crash.

I’ve got a problem [uttered at an altitude of 3,000 feet while in an inverted flat spin]

Art Scholl, last recorded words before fatal crash while filming a stunt sequence for the 1986 movie Top Gun. It is speculated that camera equipment affixed to the plane altered its weight and balance envelope, making recovery from the flat spin impossible. The film is dedicated to his memory, which you can see if you sit through all the credits.

Yes I will succeed and I’ll make some money, unless I break my neck.

Last recorded words from PSA 182, after a fatal mid-air over the airliner with a Cessna over San Diego, 25 September 1978. The unidentified voice was one of the pilots, the flight engineer, or a company pilot riding the jumpseat. 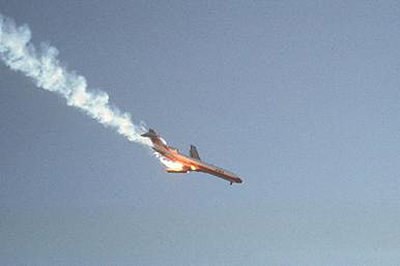 The most frequent last words I have heard on cockpit voice-recorder tapes are, ‘Oh Shit,’ said with about that much emotion. There’s no panic, no scream, it’s a sort of resignation: we’ve done everything we can, I can’t think of anything else to do and this is it.

Gamil El-Batouti, EgyptAir Flight 990 co-pilot, he repeated the phrase — English translation is I rely on God — eleven times while shutting off the Boeing 767’s engines and pushing the jet into a fatal dive, source NTSB, 31 October 1999.

There is nothing on the cockpit voice recorder or the flight data recorder to indicate that Flight 990 was intentionally crashed into the ocean.

I want to go in the air, not a bathtub.

A. Scott Crossfield. Quoted by the Washington Post as saying this the day before his fatal flight, in Clues Surface in Death of Expert Pilot, published September 16, 2007. He had written many years before in 1960 that:

“Death is the handmaiden of the pilot, sometimes it comes by accident, sometimes by an act of God.”

“Atlanta, this is Seven Nine X-ray. I’d like to deviate south. Weather.”.

If I die, I want everyone to be happy, to celebrate life, not just my life but your own life. And to laugh and enjoy life to the fullest and do what they love to do.

Shane McConkey, professional skier, BASE jumper and wingsuit flier. Conversation with Miles Daisher, a fellow member of the Red Bull Air Force, a few weeks before his 26 March 2009 death in a wingsuit accident. Reported in Outside magazine July 2009.

Well, no, you can see the ground … You can see something. Maybe there won’t be a tragedy.

Major Robert Grzywna, second pilot (F/O) of the Polish Air Force Tu-154M that crashed in known fog close to Smolensk, Russia, killing all 96 onboard including President Lech Kaczynski, spoken to the chief of protocol. Orignal Polish: “Nie, no ziemie widac — Cos tam widac — Moze nie bedzie tragedii.” The flight crew then tried to land, descending confidently into woods a half-mile from the runway, ignoring warnings from the GPWS. The cockpit was calm until the moment the plane hit a tree and flipped over. The last words on the recording are screamed obscenities. 10 April 2010.

For God’s sake, open the door!

Please accept my sincere thanks for your recent letter and for the enclosure describing the Sao Paulo helicopter rescues. I had it read to me (my eyesight has failed to such an extent that I can no longer read) and found it interesting indeed.

I always believed that the helicopter would be an outstanding vehicle for the greatest variety of life-saving missions and now, near the close of my life, I have the satisfaction of knowing this has proved to be true.

Igor Sikorsky, letter to Jerome Lederer of the Flight Safety Foundation, 25 October 1972. It is the last letter dictated and signed by Mr. Sikorsky. He died the next day, at age 84. This is the file copy held by the Sikorky Archives: 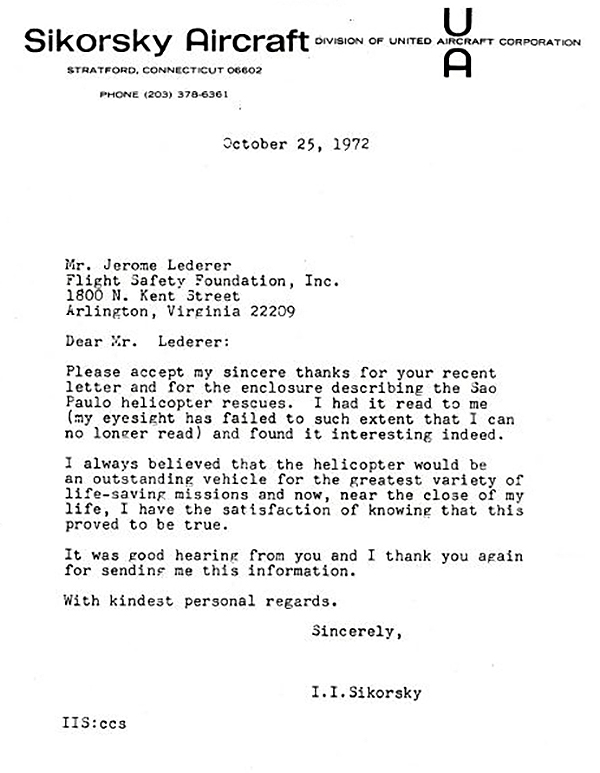 Didn’t find what you were looking for? 9/11 Quotes stand alone, and there are many more quotations on my First Flight page and the Historical Predictions page. Or try a seach of the entire database: