It's the purest form of experiencing the air. I've done it just the once, tandam freefall in Phoenix, was a total blast. but now, when flying gliders or doing aerobatics, I'm super confident I could use the parachute if I had to. Anyhoo, here's the skydiving part of my flying quote collection:

Out of ten thousand feet of fall, always remember that the last half inch hurts the most. 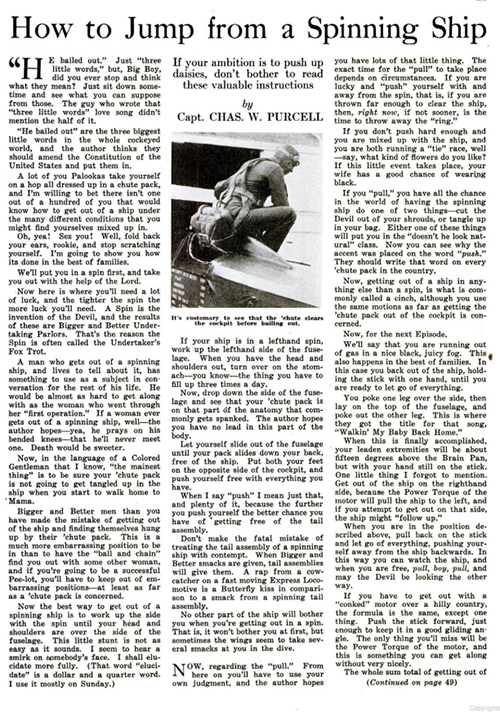 I was on the point of cutting the cord that suspended me between heaven and earth … and measured with my eye the vast space that separated me from the rest of the human race. I felt my courage confirmed by the certainty that my combinations were just. I then took out my knife, and with a firm hand, from a conscience void of reproach, and which had never been lifted against any one but in the field of victory, I cut the cord. My balloon rose, and I felt myself precipitated with a velocity which was checked by the sudden unfolding of my parachute. I saw all my calculatons were just, and my mind remained calm and serene.

André-Jacques Garnerin, inventor of the frameless parachute, describing his 5th descent in a parachute on 21 September 1802. First published as M. Garnerin's Account of his Ascent from St. Georges Parade, North Audley-Street, and Descent with a Parachute, in The European Magazine And London Review, September 1802. 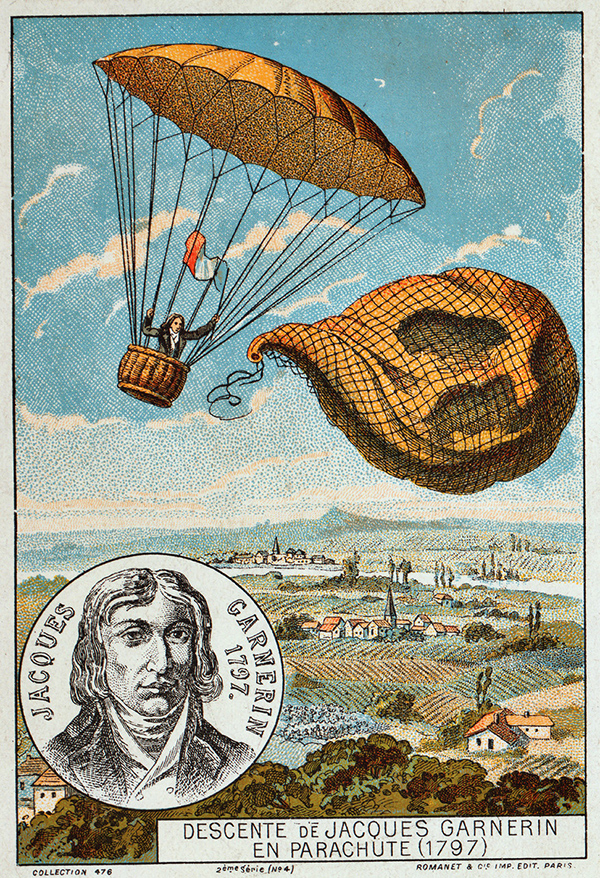 I watched him strap on his harness and helmet, climb into the cockpit and, minutes later, a black dot falls off the wing two thousand feet above our field. At almost the same instant, a while streak behind him flowered out into the delicate wavering muslin of a parachute — a few gossamer yards grasping onto air and suspending below them, with invisible threads, a human life, and man who by stitches, cloth, and cord, had made himself a god of the sky for those immortal moments.

A day or two later, when I decided that I too must pass through the experience of a parachute jump, life rose to a higher level, to a sort of exhilarated calmness. The thought of crawling out onto the struts and wires hundreds of feet above the earth, and then giving up even that tenuous hold of safety and of substance, left me a feeling of anticipation mixed with dread, of confidence restrained by caution, of courage salted through with fear. How tightly should one hold onto life? How loosely give it rein? What gain was there for such a risk? I would have to pay in money for hurling my body into space. There would be no crowd to watch and applaud my landing. Nor was there any scientific objective to be gained. No, there was deeper reason for wanting to jump, a desire I could not explain.

It was that quality that led me into aviation in the first place — it was a love of the air and sky and flying, the lure of adventure, the appreciation of beauty. It lay beyond the descriptive words of man — where immortality is touched through danger, where life meets death on equal plane; where man is more than man, and existence both supreme and valueless at the same instant.

Charles A. Lindbergh, contemplating his first parachute jump, The Spirit of St. Louis, 1953.

Why does one want to walk wings? Why force one's body from a plane to make a parachute jump? Why should man want to fly at all? People often ask these questions. But what civilization was not founded on adventure, and how long could one exist without it? Some answer the attainment of knowledge. Some say wealth, or power, is sufficient cause. I believe the risks I take are justified the sheer love of the life I lead.

If riding in an airplane is flying, then riding in a boat is swimming. If you want to experience the element, then get out of the vehicle.

What color are your parachutes?
I don't know and I hope I never find out!

Both optimists and pessimists contribute to our society. The optimist invents the airplane and the pessimist the parachute.

Only skydivers know why the birds sing. They never have to pack a parachute.

In a world in which we are all slaves to the laws of gravity, I'm proud to be counted as one of them freedom fighters.

Skydivers do it in the stable spread position.

I now know the color of fear … It's brown.

And wow! Hey! What's this thing coming towards me very fast? Very very fast. So big and flat and round, it needs a big wide sounding word like… ow… ound… round… ground! That's it! That's a good name — ground! I wonder if it will be friends with me?

Douglas Adams, The Hitchhikers Guide To The Galaxy, 1978.

It was wonderful. I'm a new man. I go home exhilarated.

President George Bush, after skydiving from 12,500 feet at age 72. He pulled the rip cord at 4,500 feet and floated down to a soft landing. Yuma, Arizona, 25 March 1997. He jumped with eight Army parachutists, but for the first time since 1980 he didn't have the secret service at his side. They were 'pacing nerviously' on the ground. Quoted in multiple press reports, including front page of The New York Times, 26 March 1997.

Bush's first jump was 2 September 1944, when he was a Navy pilot forced to leave his burning aircraft over Japanese-held Chichi island. He later made tandam jumps until he was 90 years-old. 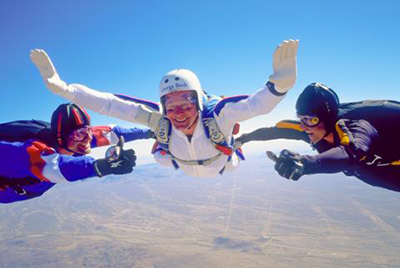 Once you've thrown your pilot chute, you're done. It's out of your hands. From that moment on you just enjoy the view or panic.

Just because nobody complains, it doesn't mean that 100% of the parachutes are working properly.

I wish the whole world could see what I see. Sometimes you have to go up really high to understand how small you really are. 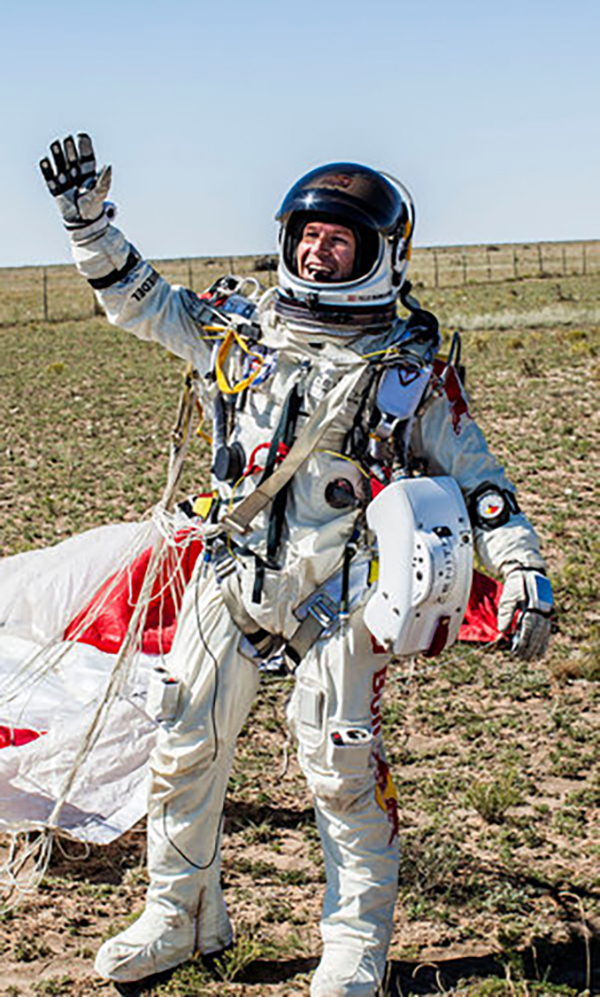 If at first you don't succeed, well, so much for skydiving.

Now he knew what Shalimar knew: If you surrendered to the air, you could ride it.

Toni Morrison, Song of Solomon, 1977. This line from her third published novel is often misquoted as “If you surrender to the wind, you can ride it”. A misquote that maybe started with a letter published in Ebony magazine, October 1988.

Didn't find what you were looking for? There are gazillions more quotes on my Magic & Wonder of Flight page and the Historical Predictions page. Or try a seach of the entire database: