, and welcome to my collection of man’s great thoughts on flying, airplanes, and being a pilot.

On the web since 1996, published years ago as a couple of books, now completely updated and formated to work on modern devices. Quotations are loosely arranged into broad topics for easy browsing, plus there’s a fast search function. Facebook and twitter pages for updates and conversation.

Magic and Wonder of Flight

Newest avquote in the collection is from a great little podcast I only found this week:

When flying was being invented a hundred years ago, when it was a million times more perilous than it is right now, there was the idea then that anybody who was a writer, an artist, or a poet, or a philosopher, or a historian, or anybody advanced, would want to be a pilot because of this unique in human history view that you can have from two or three thousand feet up.

I still feel that everyday.

Best new addition to the collection, from 1972:

What can I tell you about this first step that encounters nothing solid?

California hang gliders were made then of bamboo and cloth, but the essence was already there. “I began to understand what this sport is all about: To fly without awareness of the means of flight … Is this one more rash of the endemic madness that periodically breaks out in California? Or the birth of a genuine national leisure-time mania, like drag racing and surfing?”

A lot of pilots were inspired by this article, and the first step line is still repeated by pilots who fly with wings, but no wheels.

I like this one from new airline pilot Cetrena Simmons:

I’m so nervous, but it was a really good nervous. It was very, very awesome — a feeling I’ll definitely never forget.

She recently began working as a pilot at Republic Airways. Quote from The End of the All-Male, All-White Cockpit, New York Times, 23 April 2022.

When once you have tasted flight, you will forever walk the earth with your eyes turned skyward, for there you have been, and there you will always long to return.

This may be one of the most famous aviation quotes — but it wasn’t Leonardo! It’s attributed everywhere to him (including some Smithsonian publications, the Washington Post newspaper and a couple of science quotation books), but he never said or wrote it. For the full story on who did, see my August 2020 article in Air Facts magazine The Famous Quote That Da Vinci Never Said. 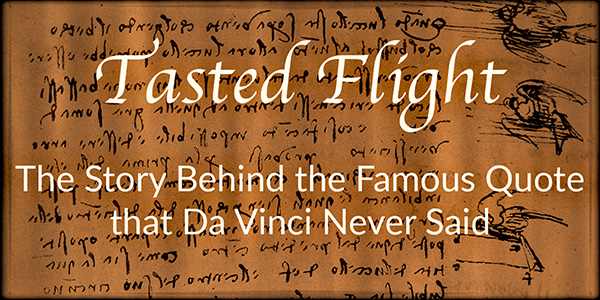 He did, however, pen this one about flying and writing:

Feathers shall raise men even as they do birds, towards heaven; that is by letters written with their quills.

The object here is to capture man’s first-hand experiences with flight in all its forms, to collect and document our spoken and written words about aviation. It’s the ultimate online quotable flyer. It is not ‘under construction’, but it very much is a ‘work in progress’. If you can supply dates or sources for existing quotes, or correct my typos, or suggest further sources of quotations, or of course if you see some cool new quotes, please please send them in to me.

Always happy to add new sections, and to correct mistakes. This collection is growing into something no one person could have created, a real product of the worldwide aviation community.

I started the site in 1996 using Netscape Navigator 3.0 Gold and hand-coded HTML in MS notepad. This was back when AOL was king and before Google even existed! Internet Archive has screenshots from 1997. It was featured in the LA Times (17 December 1996) and USA Today (17 April 1997) newspapers. Been a few changes over the years, got a grown-up URL, and now it’s made using fancy Dreamweaver software running on a Mac.

Back then research meant college liberies and their dusty card indexes. Now with wholesale scanning and digitalization of old books and magazines, finding the exact original source of a quotation is finally possible. Lots of corrections made over the years to the sometimes third-hand quotes I first found reading flying books in the late 80’s.

The collection has been cited in several academic papers, been used as a resource for many books and movies, discussed on podcasts, and was even liked by Chuck Yeager. Now spreading wings on Pinterest and Instagram. It’s pretty neat that I’ve been able to share so many sky treasures, from the ‘special section on private bookshelves’:


Thousands of volumes have been written about aviation, but we do not automatically have thousands of true and special friends in their authors. That rare writer who comes alive on a page does it by giving of himself, by writing of meanings, and not just of fact or of things that have happened to him. The writers of flight who have done this are usually found together in a special section on private bookshelves.

Richard Bach
The Pleasure of Their Company, in Flying magazine, April 1968.

Or like a poet woo the Moon,
Riding an armchair for my steed,
And with a flashing pen harpoon
Terrific metaphors of speed.

Roy Campbell
The Festivals of Flight, 1930.

I wish I could write well enough to write about aircraft. Falkner did it very well in Pylon but you cannot do something some one else has done though you might have done it if they hadn't.

It isn’t often that a writer of superlative skills knows enough about flying to write well about it.

Samuel Hynes
A Teller of Tales Tells His Own, in The New York Times, 7 September 1997.